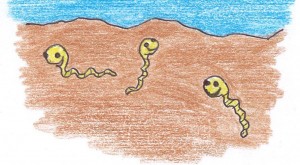 What was the original problem? The benthic communities in 1964 and 1984 were dominated by pollution-tolerant worms, but with improvements in the abundance and community composition over those 20 years. Stress on the benthos was caused by toxic chemicals in the sediment and extended periods of low to no oxygen.