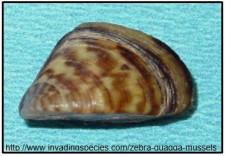 An Underwater Invader: Zebra Mussels
BY Margaret Sheldon
ON March 23, 2018
Have you ever walked along the beach, listening

to the sound of the sea gulls, the waves against the shore and the crunch of Zebra Mussel shells under your feet? If you have visited one ofOntario’s Great Lakes, you have probably experienced this less-than-pleasant addition to their waters. These unwelcomed guests did not always call Ontario’s waters home, having been accidentally brought from Europe to North America in the mid-1980s in the ballast water of ships. Since they were first introduced, Zebra Mussels have spread extensively from their initial point of invasion in Lake St. Clair. In Ontario, they now also inhabit all of the Great Lakes, many of their tributaries and the St. Lawrence River.

How does an animal without legs, fins or wings travel so far? They hitch a ride! Zebra Mussels attach to hard surfaces like rocks, bridge piers, pipes, buoys, docks, equipment and boats using byssal threads. When, for example, a boat is brought from infested waters to uninfested waters and is not cleaned properly, any attached Zebra Mussels may drop off or release their larvae in this new area. At this point, colonization has begun. In addition to being good hitchhikers, Zebra Mussels also reproduce quickly, which helps their population to spread and increase very fast. They are able to reproduce within 1 to 2 years and females release over 1 million eggs at a time! This allows these critters to multiple at an astonishing rate. They are essentially the rabbits of the aquatic world, reproducing at really quickly and with a lot of success.

You may be thinking “Zebra Mussels are not technically supposed to be here, sure, but the water in some areas where they are is so clear now! Can they really be that bad if they make our water look better?” Looks can be deceiving and this is a perfect example of that. Zebra Mussels do clear the water in some areas; this is because they are filter feeders, filtering water through their body in order to feed. By doing this, they filter out particles in the water which they can do at an astounding rate in areas with a lot of Zebra Mussels. This increases the water clarity which can look nicer to us. However, clearer water is not necessarily cleaner water and is not always good for other species. The particles that Zebra Mussels eat, such as phytoplankton, are the same sources of food that our native fish and mussel species eat. This means there is less food for the native species, which can cause the ecosystem to shift, as species are forced to search for food in other areas or die. Zebra Mussels have many other economic and environmental impacts such as clogging intake pipes, blanketing beaches with shells and cutting the feet of swimmers with their sharp shells.

While Zebra Mussels do pose a real risk to your feet (they seriously hurt!), they have another more sinister and imminent impact on our native mussel species.

Some attempts have been made to remove Zebra Mussels from our waters but the difficulty in finding a treatment that does not also harm our native species and the expensive price tag of the treatments has prevented much success. While Zebra Mussels are unfortunately here to stay, it is still so important that we all take measures to prevent them, and other invasive species, from being spread further throughout Canada. By following guidelines such as the “Clean, Drain, Dry” method for preventing transport of Zebra Mussels on boats or equipment and knowing how to identify a Zebra Mussel, you can help prevent the spread of this species throughout more of our Canadian waters. Sadly, Zebra Mussels are not the only invasive species threatening our native ecosystems now as four species of Asian Carp, Round Goby, Quagga Mussels and many others are also putting pressure on our ecosystems. Being informed about these species and what you can do to help will help to protect our waters and native ecosystems!

If you want to learn more about Zebra Mussels or other invasive species and what you can do to help, please check out the links below! 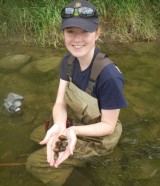