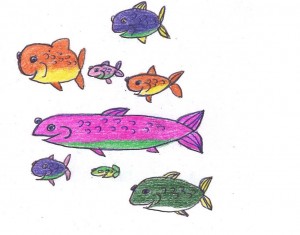 What was the original problem? Habitat for fish and wildlife was contaminated and temporary. Fish and wildlife communities were not diverse, but were rather dominated by a few overabundant species.
Listing Guideline: When fish and wildlife management programs identify degraded fish or wildlife populations due to a cause within the watershed. In addition, this use will be considered impaired when relevant, field-validated, fish or wildlife bioassays with appropriate quality assurance/quality controls confirm significant toxicity from water column or sediment contaminants.
Delisting Guideline: When environmental conditions support healthy, self-sustaining communities of desired fish and wildlife that would be expected from the amount and quality of suitable physical, chemical and biological habitat. An effort must be made to ensure that fish and wildlife objectives for Areas of Concern are consistent with Great Lakes ecosystem objectives and Great Lakes Fishery Commission fish community goals. Further, in the absence of community structure data, this use will be considered restored when fish and wildlife bioassays confirm no significant toxicity from water column or sediment contaminants.
What Has Been Done?
How Are Things Today?
These charts show the population dynamics for the targeted colonial water-bird species with the red shaded area showing the recommended target or target range.
What Still Needs To Happen?
When Will The Status Change?