Winter Sports on the Bay 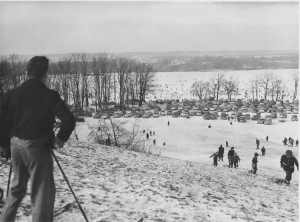 In the late 1800’s Hamilton harbour was a giant winter playground. People fished, skated, held curling tournaments, and even went “sailing on the ice” - sailors sat in little boats with skis and flew along the ice. Also in the latter part of the 19th century,  it was not uncommon to witness horse races on the Harbour, in the dead of winter – the driver would sit in a sleigh while one horse pulled them across the ice. Hundreds of people would gather for these events braving the winter cold to bet on their favourite horse!