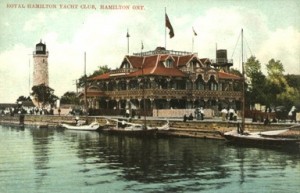 Designed by architect William Stewart and built in 1891, the original Royal Hamilton Yacht Club was located adjacent to the Burlington Lift Bridge along the beach strip. Features of the building included a lighthouse and swing bridge. Unfortunately, a fire destroyed the building in 1915 and later, the Club was rebuilt at the foot of Bay Street. Since its inception in 1891, the mandate of the Club was and continues to be to promote local and international yacht racing. Over the decades, the RHYC has won several prestigious awards including the Ontario Sailing Association Regatta of the Year and a number of Youth Performance Ranking Trophies. In 2002, the Club  had the honour of hosting the International Europe Class World Championships. For more information click here.