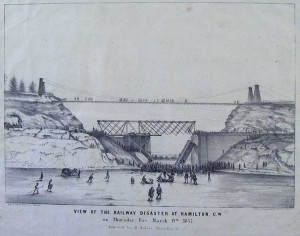 On March 12, 1857, one of the most infamous railway disasters occurred above the Desjardins Canal. A Great Western Railway passenger train was nearing Hamilton en route from Toronto and began to cross the canal’s swing bridge. The chasm, over which this bridge was erected, was 60 feet high and was created by cutting an outlet for the canal through Burlington Heights. "Watching the train approaching the bridge was a poor woman that resided in a house by the canal. She had reported after the accident that while she watched the train approach the bridge from her window, that it appeared to her as if the train swayed to one side then all of a sudden there was no train to be seen."- Frank Leslie's Illustrated Newspaper. Within an instant, the weight of the train broke through the bridge’s timbers. The engine was the first to hit the frozen canal followed by a tender car, baggage car and two passenger cars. The engine and tender car were immediately crushed on impact – at the time, the ice in the canal was two feet thick. Of the 90 passengers on the train that day, only approximately 20 survived. Almost everyone in the first passenger car perished and many in the second car. Those that survived were terribly injured. It was later learned that a broken axle on the engine caused the train to leave the tracks and crash through the bridge. For more information click here.