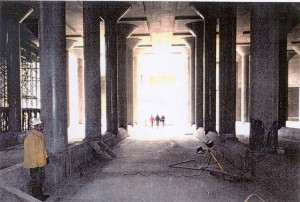 The older portions of the City of Hamilton’s sewer system collect both domestic sewage and stormwater runoff in a single pipe called a combined sewer. This mixture, called combined sewage, is then sent to a wastewater treatment plant. During large storms, stormwater can exceed the capacity of the treatment plant. During such events combined sewage may enter Hamilton Harbour without treatment. A huge tank the size of a football field has been built underneath the Bayfront Park parking lot. The City built the tank to prevent sewage and street runoff from going into the Harbour during rain storms. After a storm, the water is pumped out of the tank to the wastewater treatment plant to be cleaned before emptying into the Harbour. There have been 9 combined sewer overflow tanks (CSO) built throughout the City of Hamilton. For more information click here.