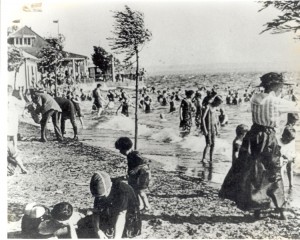 During the early to mid 20th century, the residents of Hamilton did not have to go far to enjoy sandy beaches and cool water - they could head on over to the Burlington Bay beach strip (a four mile sand strip separating Hamilton Harbour from Lake Ontario). Many Hamilton citizens had summer cottages on the strip; it was common for wives and children to move in and spend the warm summer months on the beach, while husbands continued to work in the city and visit on evenings and weekends. The strip was the place to be with restaurants, hotels, an amusement park with boats, swings, slides, a Ferris wheel and even a small roller coaster! The amusement park ran until 1978 at which point the City of Hamilton decided not to renew the lease for the park and slowly, one by one, rides and attractions were sold. Since those days, the strip has been altered considerably by fill used to construction the Skyway Bridge, the QEW and the Canada Centre for Inland Waters. For those looking to explore the beach strip, the Hamilton Beach Recreational Trail is a great way to venture through the beach strip community. For more information click here.