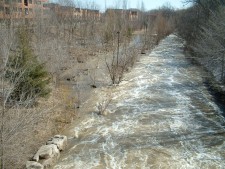 Spring Comes to the Hamilton Harbour Watersheds
BY Hazel Breton
ON April 4, 2014
By March, the worst of the winter would be over. The snow would thaw, the rivers begin to run and the world would wake into itself again.
Not that year.
Winter hung in there, like an invalid refusing to die. Day after grey day the ice stayed hard; the world remained unfriendly and cold.
― Neil Gaiman, Odd and the Frost Giants

The above quote pretty well sums up our situation here in the Hamilton Harbour watersheds. Following a very cold and snowy winter, spring has arrived. The presence of a polar vortex this winter has kept us in its frigid grip. In a changing climate we fully expect that extreme weather events will be the new norm. The question remains are we ready to deal with these events?
This winter saw snow and ice accumulations in excess of the 30 year average for the month of February. Temperatures for January and February were 4 to 5 degrees colder. The ice storm in December kicked off winter and was very quickly followed by a number of significant snow storms. Snow has been on the ground since December and accumulation has risen to some of the highest we’ve seen in the Hamilton area. Lower winter temperatures have allowed for thicker ice formation in creeks and ponds, making the potential for ice jams and associated flooding a real concern.

With no January thaw this year, a spring melt will generate higher than normal flows in local streams and creeks. Also of concern this year is the remnant impact of the ice storm in December as trees and other vegetation that were broken and damaged during the ice storm are now washed into creeks and carried downstream. The potential for debris jams is high which in turn elevates the potential for flooding.

This spring, temperatures have remained below normal and this has allowed for our runoff to local creeks to be more gradual. However there has been strong daytime melting and the power of water can be daunting and should never be underestimated. Spring is the time of year when rivers and creeks are hard at work moving sediment and water from the headwaters of their watersheds to the confluence with a larger river or lake. As water and sediment are transported along a stream corridor, important work is being done to shape the bed and banks and this allows the creek to armour itself against erosion. Higher flows now mean that a creek can access its floodplain and create new life by providing excellent conditions (nutrients, moisture etc.) for various floodplain species to grow and thrive. There is a natural balance as creeks carry on this work.
As creeks empty into Cootes Paradise there is a calming effect as the water flow slows down and water levels rise and empty into Hamilton Harbour.