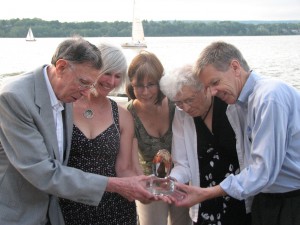 The Bay Area Restoration Council's annual awards recognize the efforts of organizations or individuals that support the work of BARC and the Hamilton Harbour Remedial Action Plan. They are presented annually at BARC's Annual General Meeting.

Implementation Award
McNally Construction Inc - For outstanding management of Phase One of the Randle Reef Environmental Containment Facility, the construction of the double-walled steel sheet-pile structure to contain the most contaminated toxic sediment in Hamilton Harbour.
Special Recognition Award
Marilyn Baxter - For a twenty-five year career with the Bay Area Restoration Council and the Hamilton Port Authority in the service of Hamilton Harbour’s restoration and as a champion of continued efforts to fully establish and fulfill the goals of the Hamilton Harbour Remedial Action Plan.

John Hall - For twenty-five years of outstanding leadership on the implementation of the Hamilton Harbour Remedial Action Plan. John served as Manager of the Hamilton Harbour Fish and Wildlife Habitat Restoration Project, 1991-2000. Following that, John was the Hamilton Harbour RAP Coordinator until his retirement in 2016. John has had a significant, positive influence on almost every aspect of the restoration of Hamilton Harbour, using his deep knowledge, diplomatic skill and personal integrity to align stakeholders, overcome obstacles, and move projects forward. It is safe to say that John’s service has had a lasting and major impact on the Harbour itself, and for that we are all grateful.

Martin Keller - For extraordinary voluntary service to BARC as a member of the Board of Directors for ten years between 2003 and 2017. Martin served as Vice President for six of those years and as President for four more. In 2012, Martin also chaired the Hamilton Harbour Remedial Action Plan Stakeholder Forum, reconvened to update the delisting objectives and reconfirm the status of all beneficial uses. Martin served each year on BARC’s Monitoring Committee and contributed to several annual Towards Safe Harbour reports, including three of BARC’s five-year report cards on the progress of the Hamilton Harbour RAP. Most recently, he oversaw the creation of and chaired BARC’s new Technical Advisory Committee. Martin’s devotion to the Harbour and to the community, as expressed through his service to BARC, is inspiring. We deeply appreciate his volunteer commitment, his wisdom, experience, knowledge and kind manner, which have made our work with him not only effective, but also very pleasant.
Duncan Boyd - For a remarkable career in the Ontario public service that spans the entire Great Lakes Remedial Plan program, with initial and continuing influence on the Hamilton Harbour RAP. Duncan started with the Ontario Ministry of the Environment in 1981 as an Environmental Scientist and Sediment Specialist in the Great Lakes Section, and since 2003, has played a supervisory leadership role at OMOE in Great Lakes water quality monitoring. Duncan played an important role in developing the Stage 1 and Stage 2 RAP Reports and earlier research and documentation that laid the groundwork for the Hamilton Harbour RAP. From 2006 until his retirement in 2016, Duncan chaired the Hamilton Harbour RAP’s Water Quality Technical Team. Duncan is a trained scientist gifted with the ability to communicate effectively to informed general audiences and to lead them into decision making roles. He is passionate about environmental protection, a wonderful personality who inspires those around him to make a difference.

Region of Halton- Accepted by Martin Thissen (Manager, Wastewater Treatment, Region of Halton).
For completion of tertiary treatment upgrades to Burlington’s Skyway Wastewater Treatment Plant. This project will produce effluent that exceeds the goal of the Hamilton Harbour Remedial Action Plan for phosphorus, and as such will make an exceptionally significant contribution to improving water quality in Hamilton Harbour and to the completion of the RAP.

Victor Cairns (BARC Treasurer) - For extraordinary voluntary service to BARC as a member of the Board of Directors for ten years between 2006 and 2016. Vic served as Vice President for two of those years and Treasurer for six more. Vic also served all ten years on the Monitoring Committee and contributed to several annual Towards Safe Harbour reports, including two of BARC’s quinquennial Report Cards on the progress of the Hamilton Harbour Remedial Action Plan.

Cootes to Escarpment EcoPark System - For the multi-institutional initiative to preserve and manage the health and continuity of an area of Hamilton’s Harbour’s north shore that is home to biological diversity of national significance. The EcoPark project is already raising awareness and knowledge of this unique local natural resource.
McMaster University - For renewed leadership under President Patrick Deane in establishing the President’s Advisory Committee on Natural Lands and increasingly embracing outdoor education. For continuous logistical support to BARC, since 1991, by the Department of Biology. And for a wealth of research from across disciplines that has been vital to the ongoing successes of the Hamilton Harbour Remedial Action Plan.
Kathy Trotter - For outstanding administrative service to the Hamilton Harbour Remedial Action Plan. Since 2000, Kathy has been the organizational strength behind the RAP’s Secretariat and numerous Committees, and her administrative skill was key to the functioning of the RAP.
Eric McGuiness - For outstanding professionalism and dedication to the coverage of local environmental issues, especially the remediation of Hamilton Harbour. Eric’s thoughtful and thorough approach helped citizens to understand the natural, scientific, political and commercial complexities of restoring a modern harbour. He reported fairly and responsibly, helping to stir informed community participation and shape the agenda that today is bringing the Harbour back to health.
Scott Koblyk - For extraordinary commitment and service to BARC as a member of the Board of Directors for 10 years between 2001 and 2015. Scott served as President for 6 of those years, overseeing the hiring of two Executive Directors and lending his professional skills and knowledge of fundraising and management to significantly advance the organization.

Sarodha Rajkumar - For outstanding service to BARC as a member of the Board of Directors and as chair of the Monitoring Committee for the past six years, overseeing production of BARC’s annual Toward Safe Harbours report on the progress of the Hamilton Harbour Remedial Action Plan.
The City of Hamilton - For leadership in the construction of an eleven-hectare coastal wetland at Windermere Basin on Hamilton Harbour’s southeastern industrial shoreline. And for partnering with BARC to establish the Bayfront Wall of Distinction honouring the most outstanding citizen contributions to bringing back the Bay.

Janette Brenner - Service on the board
Eric McGuiness and Naomi Smith - Promotion of the revitalization of the Bay
Royal Botanical Gardens -  Involvement in key aspects of the Remedial Action plan and its exemplary restoration efforts and stewardship of natural lands
John McLennan - Vision, initiative and leadership
Barb McKean - significant contributions in the field of environmental education

Make meaningful and substantive contributions to your community – become a Bay Area Ambassador at our outreach kiosk at Bayfront Park.
Volunteer!

BARC is pleased to announce  that we attained Imagine Canada accreditation for our ongoing efforts in the restoration of Hamilton Harbour and its watershed.