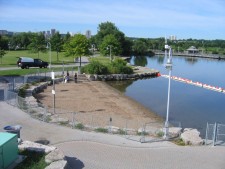 Pier 4 Beach is a small man-made urban beach surrounded by turf grass and paved bike paths and located on the southwest shore of Hamilton Harbour. Previous to 2005, Pier 4 was not suitable for swimming for half the bathing season because E. coli levels were well above the provincial safe swimming guideline of 100 colony forming units of E. coli/100 ml of water. This prompted the City of Hamilton, Environment Canada and collaborators to investigate the source of elevated levels E. coli. In 2005, Environment Canada, using microbial source tracking (MST) (a genetic approach to differentiate strains of bacteria from human versus animal gut), verified bird poop from geese, gulls and ducks to be the most likely source of E. coli at Pier 4 Beach. Since then, efforts to control E. coli focused on bird deterrent mechanisms, including egg oiling, street sweeping of paved walkways, canine patrol, and installation of visual and moving features such as artificial hawks and periodic use of lasers. In August 2005, the City of Hamilton incorporated mechanical grooming and installed a fence and vegetation barrier around the perimeter of Pier 4 Beach and a row of buoys parallel to the beach offshore, preventing the birds from accessing the beach from the walkway or the water. Mechanical grooming of the beach sand is completed by hand using a garden thatch rake where unsafe debris is gathered and removed. These deterrent measures proved successful where a statistically significant decrease in E. coli levels was evident between 2005 and 2009 to below the safe swimming guidelines resulting in >80% days open for swimming.

In recent years, the presence of microcystin, a hepatotoxin released by cyanobacteria harmful algal blooms (cHABs) have been responsible for beach postings resulting in the decline in % days open for swimming at Pier 4 Beach in 2010, 2012 to 2014. This continues to be a challenge for beach managers because at present there are no means for the City of Hamilton to control or prevent cHABS accumulation in the nearshore area of the beach. This is a harbour wide issue and is being addressed through the HHRAP by the implementation of phosphorus reduction strategies.

Despite the promising results of the bird deterrent measures and mechanical grooming at Pier 4 Beach, there are instances where E.coli levels are elevated above the safe swimming guidelines even in the absence of birds and precipitation events. Beach sand may act as a suitable home for E. coli and potentially influence nearshore recreational water quality. Environment Canada conducted a beach grooming study in 2009 and 2010 at Pier 4 Beach where three beach grooming techniques were compared to evaluate E. coli numbers in beach sand. Results showed no statistical significance difference in E. coli numbers when comparing grooming techniques or the control, however, the beach sand was slightly moist about 40% of the experimental period which may indicate the water table was close to the surface potentially protecting the E. coli from desiccation. The City of Hamilton discussed the feasibility of adding new E. coli free sand or replacing sand to decrease the E. coli numbers, however recolonization of E. coli free sand can occur within 2 weeks of sand replacement. Also, depending on the grain size of the additional sand, capillary action from the water table may allow for moisture to penetrate up to the surface of additional sand by hydraulic conductivity providing a suitable home for E. coli growth.
Moving Forward
The City of Hamilton will continue with bird deterrent mechanisms to mitigate the E. coli. In 2015 Environment Canada plans to monitor E. coli at Pier 4 Beach to measure remedial action plan endpoints particularly during cHAB blooms to determine if the beaches could be open in spite of the blooms. Environment Canada will continue to collaborate with the City of Hamilton to mitigate E. coli at Pier 4 Beach in efforts to provide the public with a safe and aesthetically pleasing beach.